Rimbaud on Guard at the Door of Sleep

the match girl half her wares.

The match girl, with a mouthful of ladybugs,

has already left for Pittsburgh.

Every flower evaporates in winter. In the depth

of winter, even Grendel doubts

the black bare branches will ever be reborn.

He slows his kills.

Don’t be shy. There’s a groaning board of cakes

in this castle, all decked out for death.

The most recent death if you don’t count

all those who died of starvation, drought,

war, drought brought on by war,

the worm on the sidewalk half gray,

half pink, not plump, and certainly

once again. She paces impatiently

by the side of the pond where the frogs

have not woken. We walk her

back to the motel room

her husband had been married which means

Goldilocks has her hair done up in braids again.

It’s a cute look. The wolf casually, or perhaps

not so casually brushes

a hand against the trailing ends.

A merry-go-round goes to ground,

digs a deep rut in the rough earth and the ponies

They are chickens and pigs and sheep.

They are boas, ostriches, dinosaurs. 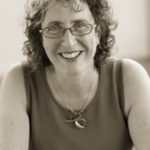 Deborah Bacharach is the author of After I Stop Lying (Cherry Grove Collections, 2015).  Her work has appeared in Arts & Letters, The Antigonish Review, Poet Lore, and The Southampton Review among many others.  She has been nominated for a Pushcart Prize and The Orison Anthology.  She is an editor and teacher in Seattle.  Find out more about her at DeborahBacharach.com.