Jenny Boully: An Interview in Questions from Her Books 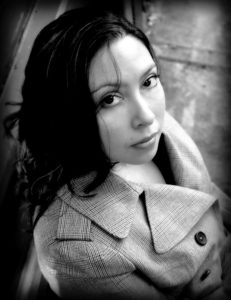 Jenny Boully is the author of five books, most recently of the mismatched teacups, of the single-serving spoon: a book of failures (Coconut Books). Her other books include not merely because of the unknown that was stalking toward them (Tarpaulin Sky Press), The Books of Beginnings and Endings (Sarabande Books), [one love affair]* (Tarpaulin Sky Press), and The Body: An Essay (Essay Press). Her chapbook of prose, Moveable Types, was released by Noemi Press. Her work has been anthologized in The Best American Poetry, The Next American Essay, Great American Prose Poems: From Poe to the Present, and other places.

Anthony Michael Morena is the guest fiction editor for the “Constraint” issue of The Ilanot Review.

Note: All of the questions in this interview were taken from Jenny Boully’s The Book of Beginnings and Endings (Sarabande Books, 2007) and not merely because of the unknown that was stalking toward them (Tarpaulin Sky Press, 2011).

All of these are to remind of what the ending is for. The ending is to grow into a creature with wings. That, after all, is the promise we keep to ourselves in order to continue living.

Does love then forever estrange us? Keep us from participating in the simplest of collective human activities?

But how do you know?

Because there are always a multitude of lives, stacked, wedged up against each other. I am never myself. I am always at fault. I am never the reason. I am always other. I am not good at anything. I sever myself when I get a chance. I cut the safety line, the thread. I think the other possibility will open up. It never opens up. So when the bank teller says “Next” and I realize that it’s me, I’m the one, I can’t quite do it right: the checks all wrong, not endorsed, not in a proper order. Everything will get done, will be taken care of, but it won’t and it’s not. It remains up to me, but I am never myself.

How many people do we know walk out of the hospital when, even just twenty years earlier, their ailments would have surely killed them?

I think I was a bit naïve. I should not have said “twenty years earlier”; I should have said “two hundred years earlier.” That would have made the better sense for what it was that I was attempting to say. What I meant was that life is not as we know it. Life is something that we think continues when really it never did continue and, in some places where there is a lower standard of medical care, does not continue. I am one of these. My daughter and I were these. We left the hospital when, two hundred years earlier, we would have died. But I know more: my mother whose fibroid flowered inside her like a root vegetable, my father whose cancer was suppressed by strange pathogens. I think we come to realize, being in the care of doctors, that time begins many times.

What is it that this is trying to do?

I guess I could say that it is trying to let the inside out, but I feel, in this interview, that it’s just coming back to me again. To confront oneself in this way, it makes me realize that underneath each statement, each sentence, is a whole other essay, a whole other life, and each essay and each life varies with how much time has gone by.

How then, in writing or life, to transfer what is inside and have it interact with, enjoy an existence in, the outside?

Speak of the devil. I swear I didn’t read ahead. And here I am again. It must be a central conundrum in my life. I used to believe that all one had to do was write and this would just happen, but now I know that that is merely wishful thinking. It’s so much more difficult than that; the stakes are so much higher. It’s almost unrealistic to have this convergence occur. As soon as it is said, I find that it bears repeating, it bears redoing, it bears dismantling, it bears going unnoticed; it wants to be silent again. Everything, it seems, is imperfect, and although I used to love the imperfect, the broken quality of saying, I find that I cannot live with myself so easily these days. I want the hook and eyes to match without a hitch each time.

Should I begin then to keep a journal?

Another central and ratcheting question of mine. I have a terrible and abusive relationship with journaling. I kept journals since I was eight. I wrote almost daily. At fifteen I tore them up page by page and threw them out. I did this not in an act of renewal, but rather in an act of self-hate. It was to be a grand erasure that would make me new yes, but really, I wanted to not be me and the evidence of me needed destroying. It is an act that I regret almost daily. That has been my journaling of late: regretting. That I can do daily. I picked up journaling again right after that, but I was mostly a liar, inventing a self that I wanted to be. In college, I journaled regularly, but those are dark and the self in those books is scary. My grad school journals are the worse: intense and messy and heralding dangerous behavior. There were only dismal things around the corner. I began to feel that the journal was a performance, so to save myself, I quit.

They are romantic, but rarely given. In another landscape of my life, there they are in full bloom: the lilacs I have so loved, the lily-of-the-valley bridal bouquet, expensive and dear. But here I am in the upper Midwest where lilacs struggle to grow and I had roses in my bridal bouquet: the lily-of-the-valley was too expensive and too dear. Flowers tell a story, but they only exist in my head.

But shouldn’t there be, at a last meeting, something said?

I’ll regret having the last word; I’ll regret not having the last word. There is no way to win, no way out. If I say something, I’ll regret it, whatever I say. And, I know now, that it won’t matter anyway. The last meeting is more about how the sun was or was not shining that day. It’s more about a look, a nod. I remember a particular last meeting, the glint of broken glass, the passing traffic. I let him say that he’ll see me again, and I did not particularly care if everything—my body, the scenery—was carted away.

Why then not absence instead of brilliance?

Because we will become beings with wings, whatever that means. It will mean a different thing to each of us. But that is why there is this and not this. I can hold the dark inside of me now because of this.

But we do. That’s the tragic thing about it all. We are pretending, but even that isn’t enough. There ought to be another level below pretend where we could more safely hide. But maybe that’s what beautiful, too, about all of this: beneath everything, I can detect it, what is really meant.