The wolf surprised himself. The pot was hot yet he was a clear head of philosophy. He alighted from the fireplace, raised a finger against the three pigs armed with axes, cleared his throat, and leapt through the window.

At the bank of a river he reflected, if he would make anything of himself, he must yoke his instincts to better inclinations. Pigs, anyway, were not good for his cholesterol.

He vowed to touch pork no more. That is, after a farewell lunch.

One had a house of sticks, and huff… puff… The sticks were down, the pig aflight, the outcome inevitable. Hors d’oeuvres.

The next had a house of straw. The wolf reconsidered, Wasn’t one enough, especially with his belly expanding into his middle age… But the house just collapsed under his glance. The pig froze, erect but broken inside. It was an act of mercy.

Returning to the woods, the wolf found himself hungry again. Had he accomplished nothing? He envied his victims their ends—free from the windy circles into which he watched his life dissipating. But wasn’t he made for this?

There is no nausea like being vomited by the wolf. She knew the story. She wouldn’t trot back to mother. Wouldn’t have her basket renewed with delights never to be consummated on either side of the timeline.

Eat me again! she screamed.

But oblivion begets oblivion. And with all the punchlines stale, humor and mischief are refugees in philosophy.

A moment too late, she reflected; and she was given to contemplating the contrast: his axe, her basket.

They were born from the oven. They escaped saying they’re brother and sister. They began tracing the breadcrumbs, to an asymptote, they felt, which must be home.

On the way, a hunter nearly shot them dead. He warned them, Stick to the city walls! And a prince scoffed that breadcrumbs lead nowhere, that they’re dropped by vultures.

They became atheists. They smashed the idols hiding among the trees. And after a lifetime of picking through the underbrush with microscopes, they received prophecy. When the prince returned, they pulled off his face and he was a frog.

One day the asymptote arrived at their home. He took her for his bride.

But could they have heirs without breadcrumbs? Hunters return, and frogs morph into princes. 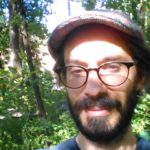 Ben-Yisrael, philosopher by mistake, editor by day, psycholinguist by night, Meir-Simchah Panzer grew up in English in a Virginia suburb of Washington, D.C., and now lives between several languages with his wife and children in Jerusalem.