Where Do We Come From? What Are We? Where Are We Going?

Gauguin’s greatest painting offers more length than depth. Flora flaunts toxic primal. Figures angle from here to there. Females inflate, men flatten. Fruit hovers in the middle ground. I have no choice but to shear from right to left. Syphilis bent Gauguin double and posed his models on edge. The overgrowth, instead of receding in the blast of his vision, approached. Frightened him into painting further and further. The erect central figure forms a pole around which the painting revolves. Sometimes I’m that figure, but often I’m someone else, even the old woman at the far left. A couple strolls through the gallery, chatting in mandarin. A group of kids sizzles past, phone cameras snipping tiny shards of paint to bring home. Gauguin vandalized the imagination. He warped and twisted until it cried aloud. Then he fed it Tahiti. Or maybe Tahiti devoured his secret organs, those that exuded the oils he used to mix his colors. I can’t read the painting because the ocher and brown repel my gaze and then replace me with my Tahitian ego grazing lascivious mangoes and breadfruit. Gauguin is still laughing over my childhood, which when I first saw his great painting I almost found the courage to dedicate to myself. 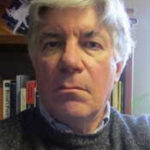 William Doreski lives in Peterborough, New Hampshire. He has published three critical studies. His poetry has appeared in many journals. He has taught writing and literature at Emerson, Goddard, Boston University, and Keene State College. His new poetry collection is A Black River, A Dark Fall (Splash of Red, 2018).