There is a bomb under the table
that refuses to go off. The air congeals,

a semi-transparent thickness pooling
in the inauthentic heirloom gravy boat.

The rest is disposable, redoubled paper
plates and plastic cutlery unable to provide

an overture of metal against metal. Unscored,
the family constitutes itself, an annual tableau

aped from the stitched-together memory
of a nostalgic television special. Nothing

suggests the proximity of an ending
more than the infinitesimal slowing

of the scene, as if an entire lifetime
must be crammed into the instant

before the blast. A fat motionless tick
hangs in the air, unheard, bloats itself

on the face of the grandfather
clock unwound for years. Unwinding, the hand

breaking. Beside her the empty chair,
air still trembling from the departure,

the daughter behind the bathroom door
forever, now, powder and nose

unseen by the niece’s flittering eyes,
shaking even like this

as she continues not eating. The mother is
caught pre-slur, pre-abortive effort

at a neutral conversation
begging its own foreshortening.

Disengaging, the son shrunk down
into a tasteless mash. The father,

sad and silent, drifting through it all
full-speed and unremarkable.

Will no one tell them?
There is a bomb under the table

praying for a match
to set it off. 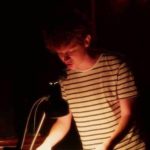 T.J. Smith is a poet in New York. Originally from Jacksonville, FL, he studied German and Creative Writing at Princeton, and he’s currently completing an MFA at NYU, where he’s the Web Editor of Washington Square Review. His work has appeared or is forthcoming in Gyroscope Review, Split Rock Review, Red Flag Poetry, Drunk Monkeys, Snapdragon, Stoneboat and Nassau Literary Review.