Self-Portrait as Open Flesh of an Undetermined Panic

Most of the panic remains virginal in the backyard, mostly quince-coloured, growing

like a flower sitting on an acre of phrases, mostly gerund, echoing

the voiced Gustav Klimt canvas that speculates on a mottled shadow.

The figure of it is the sharp side of human,

the freckled face of suspicion

entering the green steel fences of our house, near the grass

that beds the pain, the pity, the first person

with a complex set of subjunctive mood. At about ten in the morning,

before lunch is served, short of parenthetical immensities

about the recent case of a dog, the doomed offering beneath the orange sun,

the children surround the area

where there is a smell drawing a familiar incident.

recalling a life in the hay, once mistakenly

begging for bones, sometimes barking at the neighbour’s

However, in the interest of ungrammatical bodies writhing into a tiny talented form,

a secret snapping in, then momentarily a scintillant revelation:

the children should know

the fleshy ground entails to stain and swell the inside

that is the given pronoun, the only thing escaping existence

to sink the unknowing world in the deadest drink of panic. And that a stranger

from out of nowhere, appears, to finally recognize the goat, mistaken for a dog,

as open flesh of an undetermined time and space, as syntax 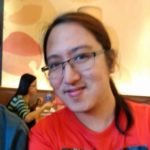 Lawdenmarc Decamora is presently finishing his MA thesis in literary and cultural studies. He holds an MFA in creative writing and teaches literature in the oldest existing university in Asia, the University of Santo Tomas (UST) in the Philippines. His literary works have appeared or are forthcoming in LONTAR: The Journal of Southeast Asian Speculative Fiction, Kartika Review, TAYO Literary Magazine, We Are A Website Literary and Art Journal of Singapore, Ginosko Literary Journal, In Between Hangovers, Panoply, Mad Swirl, The Cadaverine, Bukambibig, Cruising Going Places of Manila Bulletin, Paper Monster Press, To Voice My Own, and transit: an online journal.