Portraits of a Woman

A woman sits in a painter’s studio looking out the window at the street below. She has her own life—a job, a new red Fiat, a lover she sees on alternate weekends—but as she sits here for her painter friend, who she wishes were her lover, examining the ever-shifting scene of pedestrians and cars below, she imagines herself a different woman, a character, perhaps in a novel. As that character, she feels the hollow calm of someone who has just made a life-altering decision—sharing a lonely secret, getting in touch with a lost daughter, or finally breaking up with her spouse.

The woman sitting for the artist (how lovely his long, thick hair) does not have a spouse or daughter, but she is certain the woman she is imagining herself to be has both. And she knows this character is from another century, as no one these days looks out a window for quite so long, considers their life quite so seriously, so existentially, as she is now.

A few feet away from her, the artist focuses on the portrait, knowing that this is likely the last session. He chose his friend to sit for him because he considered her an elegant woman, with a distinct nose. Yet as the painting has progressed he’s struggled with what he knows about this woman, who is too morose or desperate for the portrait he wants to paint.

He is sure that she wants to sleep with him, though she is too old—over fifty—but at least she seems to know this as well. There will be no scene at the end of the session. She has offered herself up as a subject, for free, and that will be the only way he takes her.

When he looks at her from the right angle, in the right way, he can see the woman he wants to paint—not his friend, though the two might look similar to the unobservant eye. If he can erase all knowledge of her, her history, her middle-class attachments (evidenced by the expensive scarves and that silly cherry-red car she purchased), then he can find within her face the image of the woman he wants to capture.

At times, the woman wonders why she agreed to sit for the artist when nothing will come of it. She wonders how she will fill her afternoons once the artist no longer needs her. Yet what can a woman her age offer but her time in service to someone else’s vision? And, to be looked at for hours by one you admire, to look away from him knowing he is gazing at you—to be so much the object of his attention—well, isn’t that half of romance? And some would say—she has said it herself—the better half.

She thinks of her bright red Fiat, which usually gives her pleasure and a sense that she is still new in the world, alluring, and in charge, then imagines driving it home, alone, and entering her quiet apartment. The image is too still and lonely to dwell on, so she returns to imagining herself as the character in a novel. How easy it is, for that life feels more real to her now than her own. She stares out the window as her character and surrenders herself to the world. She can feel that life is in some ways over, that there is only this private nostalgia to hold on to, but to this character there is a beauty in the loss. It is nobler than the losses the woman has actually experienced in her own life.

The artist looks mostly at the portrait now, glancing only occasionally at the woman. He spends more time staring and less and less time bringing the brush to the canvas. He adjusts the brightness of a spot where the sheen from the window seems to overpower her face. To change too much, though, risks destroying what the painting has become, the way the hues are all talking to each other. He knows it is nearly done, which is to say it soon will no longer let him touch it.

For a moment he believes the portrait on the canvas is what he wanted it to be, the vision in his head, but now, the more he examines it the more he sees that it does not exactly capture the woman he envisioned. It is neither his friend nor his vision of his friend, but someone else altogether.

Sitting here day after day for two hours straight with only one short break—believing that stoicism is another quality the artist admires—helps the woman shed the details of her own life. But then a fear strikes her: Why has she spent this time imagining she is someone else, someone in a novel she has never read—that is, someone in a hypothetical novel that could only have been written in the past?

By becoming a person who doesn’t exist has she merely been erasing herself? Is this a form of suicide or is it just idle entertainment?

And then she wonders, has imagining herself as this character somehow made it real, an alternative personality that has perhaps been captured on the canvas?

The painter sees now how the room in the painting is also not his studio—it has taken on a different quality. It is her room now, and within the world he’s created on the canvas he is an outsider, an intruder.

He stares a while longer, then sets down his brush and announces that it is done.

The woman in the painting appears distant. If there is a sadness in her eyes, there is a greater resolution not to let it overwhelm her. She is not mysterious so much as reluctant, reticent. She owns the room in which she sits and it’s clear that the view she is looking down upon— indiscernible in the painting—is one she’s known for years.

The woman who is the model hears the artist’s words but does not move her head or change her glance. She understands now that she has become someone else entirely, and gathered within her is a sense that she has all the time in the world. She no longer thinks of the artist, no longer feels a desire for him. She looks out the window, sitting perfectly still, contemplating who she has become and what she will do next. 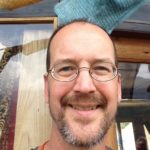 Nathan Alling Long was born in Washington, D.C. and grew up in a log cabin in rural Appalachia. Nathan’s work has appeared on National Public Radio (US), and in over a fifty other publications, including Tin House, Glimmer Train, and The Sun. His stories have also won the 2017 international OWT Story Prize and 2015 Open Road fiction award, and been nominated three times for the Pushcart Prize. “Portraits of a Woman” is part of his collection of fifty flash fiction stories, The Origin of Doubt, released by Press 53 in Spring 2018.