Translated from the Hebrew by Vivian Eden

I didn’t beat up the old man whose blood stained his white shirt
and it wasn’t I who shot the man on the mosque roof holding a brick.
In the belly of the tank I read “The Painted Bird” and in the
guard post I wrote poems (only death, I knew, frees from the line.)

But at night my blanket was terrible shame, my soul was bound
in bursts of guilt, and fear gnawed like a hungry rat. It’s good
there was at least love, that is, a girl to call and hear Tel Aviv
laughing inside her, like a child who doesn’t know he is mortal. 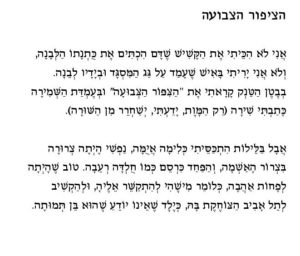 The girl soldier’s choppy voice is asking
me to make sure nothing
unusual is
happening, nothing
strange.

Well, sheep punctuate the hillside
and one Arab shepherd, a hawk
serene above and all is calm
like oil on canvas.

What shall I say, wireless girl,
nothing here is strange but me. 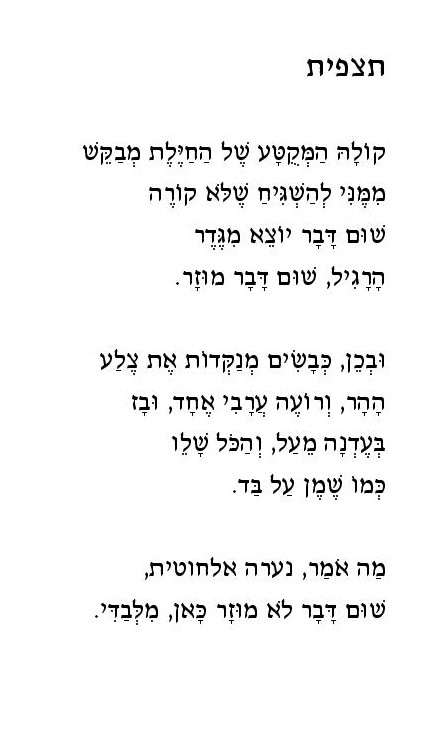 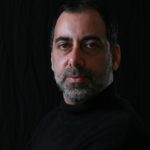 Eli Eliahu was born in 1969 in Tel Aviv. He works at “Haaretz” newspaper as a copy-editor and also writes on poetry and culture. His collection of poetry: “I and not an angel” (Helicon, 2008) was awarded the Education and Culture Ministry prize for debut books. He has also been awarded the “Matanel” prize and the Prime Minister Prize for literature. His poems have been translated into English, French, Arabic, German and Turkish. 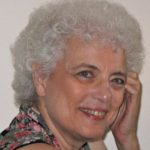 Vivian Eden grew up in Washington, D.C. and lives in Jerusalem. She holds a Ph.D. in translation studies from the University of Iowa and has published one book of poems and numerous translations of poetry and prose from Hebrew and French. She has taught theater, English and translation in both academic and informal settings and was the poetry editor at Haaretz English Edition from 2013 to 2016.