There are two heads; a girl’s head at the top and at the bottom the head of a dead wolf made into a rug.  The hair on both is dark against a mass of white, and in each a set of  eyes widely open; the girl’s are focused nowhere on nothing, but the wolf’s glass eyes are staring at us.**  Her lips are brilliant red as is the wolf’s tongue, and she balances behind the dead wolf’s head as if behind a guard dog, waiting.  The wolf bears her weight and that is how the picture is composed.  We must forebear giving all of this too much meaning, as if each flower and flower-patterned rug was really something else, some metaphorical idea of purity or lost innocence.

black magic’s hellish
performed by angels casting
their evil eye.  She can
weave spells, bring you to your knees
don’t let that white dress fool you

was silence ever
so loud, condemnatory
or bold?  Look in her
eyes like coins round and copper
blue vitriol; stare you down

what if we put there
a red rosary instead
of the white snowdrop
introduce a sense of blood
into this calm, too pale scene 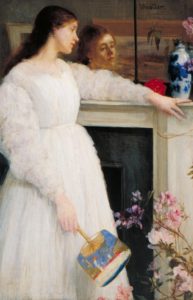 I watch my face, and wonder
At my bright hair…

I was a child when my father would take me to the barbershop on a Saturday morning.  I always sat first with the waiting customers in the leather and chrome chairs under the mirrors, and from that angle only the ceiling and the faces of men in the swivel barber chairs were reflected in the mirror opposite.  Once I was up in the barber’s chair, though, and on the leather-covered booster seat, I could see forever down the mirrors’s mise en abyme.  Tall bottles of Wildroot, Fitch’s Rose Hair Oil, and Brylcreem doubled and tripled, the jars of disinfected combs and scissors stretched away into infinity.  The shop filled with barbers and customers in layers, one upon another upon another, smaller and more distant until you couldn’t make them out anymore.  I saw my face and the back of my head at the same time, repeated, and repeated into the vanishing point .

or is she about
to turn around, her Irish
dander rising up
that soft sad face erupting
in naked vulgarities 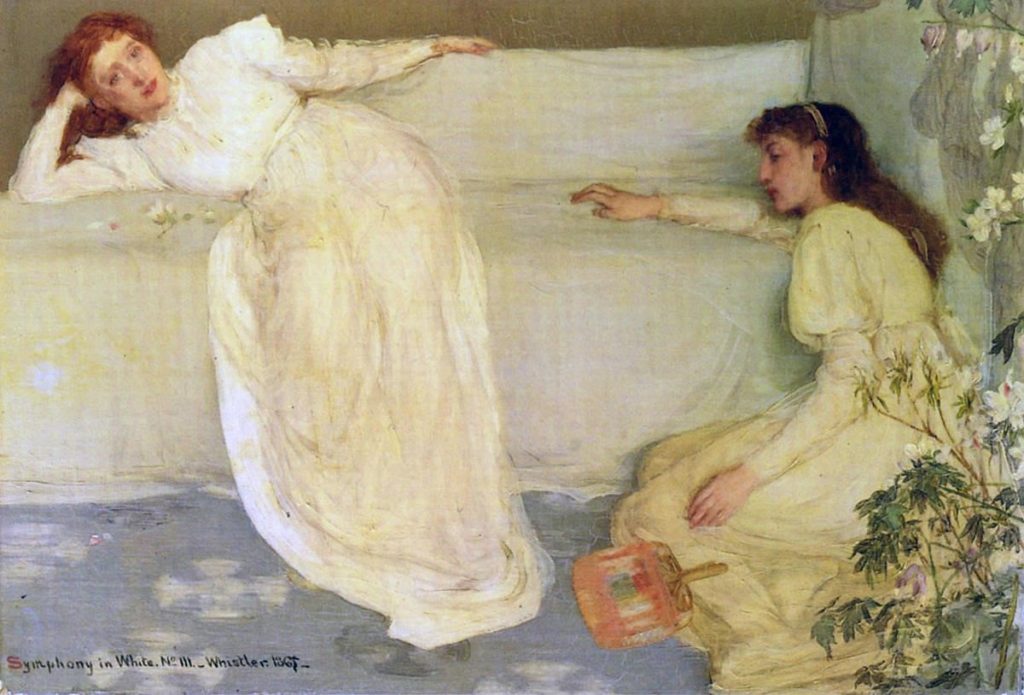 What do you think of the outline at the top?  it’s good isn’t it – and then the arrangement of the two arms on the couch like this.**

On the surface, it looks to be a picture of two girls and a couch; the painterly reality is a composition of color, light, and form.  The surface is divided roughly in half; the left side a mass of white twisting at a right angle two-thirds of the way up.  This is represented by a white dress, the full force of light is from the left, and we can see the body beneath the fabric bend at the hips.  The left arm is extended parallel to the top of the couch and the right arm makes an acute angle to the parallel, holding up the woman’s head.  Outlining the woman’s head of red hair and the top of the couch is a solid dark color, a kind of brown-gray the visible length of the couch.  In the right half of the picture, the lower corner is taken up by another girl in a white dress kneeling beside the couch.  Her right arm stretches parallel to the couch seat and her left makes a lower oblique angle to the couch’s horizontal.  The girl’s head with a mass of dark hair, and she seems to be in shadows, the color of her dress subtly darker than the other one’s.  Flowers in the lower right corner, together with an Asian fan and a swath of light blue carpet emblazoned with what looks like St. Cuthbert’s cross, balance the weight of the upper left hand corner, and so on.

his art so contrived
as to make both happenstance
and careful design
unite.  Circus contortions
at tea in the afternoon

what are they waiting
for?  One’s husband to begin
some usual stern
lecture on rising costs?
they listen with great patience

I’d say these girls look
bored; nothing ever happens
they complain.  So think
of something, the redhead says
don’t leave everything to me 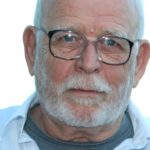 Charles D. Tarlton retired from university teaching in 2006 at which point he returned to the writing of poetry, which he had halted in order to concentrate on a career in political philosophy.  He lives in Northampton, Massachusetts with his wife, Ann Knickerbocker, an abstract painter.  He is happily writing and occasionally publishing some of his poems.