“The Finding of Erichthonius”: A Study in Stages

Despite Athena’s warning, how could they not have opened the basket?

What a racket two slithering legs would have made against the weave.

It can never be other than Pandora, the box unlatched, or Orpheus turning around.

off the Acropolis upon beholding a monster. Doughy Aglauros, sun-struck,

literally Rubenesque, holds the wicker chamber open, the sheen of her skirt

improbable as Rumpelstiltskin’s cloth, vying with deformity for our attention,

her undoing. The old nurse behind, dim foil to her charge’s young glow,

extends a hand to the half-revealed child, warmth in her eyes. It’s the instant before

the truth, the snake-like legs of Hephaestus and Gaia’s babe still hidden

by the hinge. We see it all with twenty-first-century eyes, and we can’t look away.

For two hundred years of the painting’s life, the younger woman was recast

as a gardener, bending before a basket of over-painted flowers, passive face

perfect for witnessing peonies. The added layers have been stripped off,

two curling tails restored where once a mass of floral heads obscured the infant god.

We’re always found in the end, tails switching behind a blur of petals, daring

some future historian to call our bluff. We live in the colorful world, no investigation

in grisaille this, coats of oils not enough to hide our serpent parts. 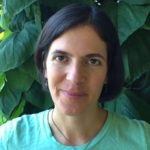 Rebecca Hart Olander’s poetry has appeared recently in Plath Poetry Project, Radar Poetry, and Virga Magazine, and her critical work has appeared in Rain Taxi Review of Books, Solstice Literary Magazine, and Valparaiso Poetry Review. She was the winner of the 2013 Women’s National Book Association poetry contest, judged by Molly Peacock. Rebecca lives in Western Massachusetts where she teaches writing at Westfield State University and is the editor/director of Perugia Press. You can find her at rebeccahartolander.com.