Excerpts from The Bower (a Belfast Poem)

Was Judas’s sin that he betrayed Jesus or that he sent
any man at all to his death? Does it matter more who was harmed?

The ex-paramilitary said it was more important who the person
was you’d killed, rather than why you did it. I can’t

believe him, couldn’t it simply be a whisper, some coins
and simple greed? There’s a fresco of Judas hanged

one where a face should be and the other on his anus.
I bought back from France a postcard of this image

more than twenty years ago. It still pulls at me.
It asks me: Who can you hate more than yourself?

It asks me: Who can you forgive? It warns: Don’t be too
astonished at your own black wings. The police tape

halts your lift home from the airport. The paper later
details the assassination two blocks away the night before,

a late supper interrupted by invasion, the attempt to hide
in the bathroom, the bullets through the door. Warned

upon his release from prison, he hid four months
from his own people, says a cab driver who’s in the know.

It was his own crew that done it. I know his father.
The boy had it coming. The textbooks say each side killed

an equal number of their own, are still doing it, in starts
and stops. Judas’ little devil digs through his gut

towards a smaller version of Judas himself, who’s birthed
from the sluice of organs on my timeworn postcard.

We tell D that the police tape is due to sewer damage as
there’d be no way to answer or stop the awful questions.

Judas wept, but what’s born from his belly is an infant,
a smaller version of himself who leaps into the devil’s arms.

And what did we do when ours was born, so dear we could
have licked her like a cat, loved her like a guitar. Everywhere

I consented to her loved face, in the blue of that broken bottle
that sliced foot, in shrubbery twisted and cut into porpoises

breaching a damp lawn—what if all of you were outside
your body, your best and worst bejeweled by dew, witnessed

by impersonal commuters, teachers, delivery people?
What were you thinking, bringing a child into this knowledge

called the world? What could she learn from you, one
who deep inside your murky soul knows it matters

who was killed, that you’d do awful things to save her.

As of late too much in the past, a neighbor asks,
What is a quiet mind? His handsome face reveals he is

genuinely confused. I know that it’s not merely
rhetorical this question, not for him. Answering

how this time she saw that Forster, age 31, didn’t
know love when he wrote it, but knew he must write

towards the mystery. What is a quiet mind? That Gornick
felt pity for Forster comforts me; I know she’s right.

If I ever find a working definition of a quiet mind
I will let everyone know. The neighbor says, It will end

only when we die. Only his generation’s demise
allows everyone to move on? Maybe we are too much

changed by event, grief, history, maybe anger and failure
so much our darkenesses that eventually we must wait

in our quiet homes, unpeaceful until the end? I have tried
to quiet my mind this year, worked a patient spinning in place,

taking notes on what I see and don’t, the mystery, studying
my frail nostalgia for when I bore a more open soul.

I won’t get that back, will I? But I would not have loved
Belfast so well in my trusting days.  At this middle stage

or Fermanagh, an infant swaddled in clean linen,
the dove of peace as Matisse printed it, simply, purely

white against a thick blue—we all want to hold it and
we want it weightless, warm, sublime. Who will rend

this quiet from the world, and place it inside you?
Would you know it’s there? Here’s a photograph of Matisse

at my neighbor’s age now, almost 80, white beard,
wool cap and robe. Seated below the photographer.

To the right, white birds, nearly transparent with sunshine,
perched on top of an open cage. On the left at his elbow,

an empty one. Behind, in the shadow, another cage, full
or empty I can’t see. A bird is in Matisse’s hands;

he holds it like a sandwich. Seeing this I feel it,
why doves mean peace. It might not even be a dove

but it rests in his hands easily, with trust. Am I ready
for quiet? Picasso had said of Matisse his friend,

that when one of them died there’d be all sorts of things
the other would never say to anyone again.

it’s hard not to go. A painting of July 12th, a day for marchers
for the losers who still suffer loss in burning piles of trash

with holy men hung in effigy, bloody songs sung by some
about the others, some drunk, some unemployed, some

who consider it their identity. The painting is controversial,
the marchers depicted in white hoods, KKK-like, here

at the Ulster Museum. What would Rembrandt say? His face
glows a honey-gold, a self-portrait on loan from London.

Prams bump through the gathered citizens here to see
the Master and I can tell he’s one who knows his worth.

Is his haggard face one of regret? After a certain age who doesn’t
fight it? Throughout his life, he painted himself often, painted his face

four times in his last year. An X-ray of this self-portrait
reveals two pentimenti: his beret was made smaller

and darker, and from his hands he took a paintbrush.
A Macedonian proverb says once you catch your bear

it will dance for you. No one buys a self-portrait: in his studio,
with a poodle, with helmet, and finally this rough, illuminated face

dancing for us his aged grief, or is it wisdom? Both?
We see it shining across the room. I read about his modest

parentage, three of his four children dead, his wife too
by age thirty. Bankruptcy and auction, his own illness.

But what does he paint when he paints his face?
The search for meaning brings us all down hard,

boom, to the knees and maybe it’s good to stay there
for a while and stare. It’s where anger slew

citizenry, where love was used up for anyone
but your own, where people burned neighborhoods,

where many are broke or old or ill, where someone
wracks the night for a version of home, where a man

paints his own tired face. Rembrandt looks at himself
who looks at me. Once you catch your bear

it will dance for you only works if you’re the bear,
only if the suffering in you rises to meet the suffering

in the other. I’ve no child with me today, no one to hurry me
back into the flurry of snack, birds, Kings Bridge, Sunnyside

to home. I’ll leave Belfast before marching season for reasons
of family, visas and money though I’ll wish I could stay by then.

Rembrandt died penniless for reasons of appetite (oh, he lived!),
and he was buried in a debtor’s grave. No, please, not regret.

Author’s Note:  This is a section of a long poem titled “The Bower.” Set in Belfast, Northern Ireland, the poem encounters a city striving for peace after much conflict. It’s a city that I have grown attached to because of this struggle and the ways it lives on in people’s lives and imaginations, including mine. 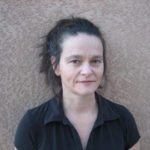 Connie Voisine is the author most recently of Calle Florista (2015). She lives in New Mexico and Chicago with her husband and child. She is recently returned from a year in Belfast, Northern Ireland, where she had a Fulbright Fellowship in 2012.