Church of The Little Monkey Jesus: A Story in Portraits

The Priest with Pastel Fingers

It wasn’t large, but it was beautiful. Jesus looked up, hair curling around his face, and his skin peeling like sunburn. It was getting harder to see him each day. The fresco was damaged, water wept through the stone. The builders scraping the wall with their ladders hadn’t helped.

It worried the priest as much as the declining size of his congregation. Throughout his sermons, he often looked up and felt he could see people shrinking before him, shrivelling into their pews. One day, Jesus would disappear too. His face rubbed away onto the fingers of women and children patting him for luck.

The priest inspected the fresco and paint rubbed onto his fingers. He thought of kissing Margarite. Just that once, before the seminary. The mother of his friend, Paul, she cut the hair of every man in the village. He could remember nothing about it, but her blowing off the bristles, the powder she wore smudging a curve of peach onto his neck. He never washed it off, but let fade in its own. It took a day.

Something had to be done, for sure, someone had to be found to restore the fresco. It was too disturbing how a picture could suddenly make a man wonder whatever happened to a woman he hadn’t considered for decades. The paint peeled and the priest pictured her dying. He saw a village full of men with hair growing down to their knees.

The Woman with the Paintbrush in Her Hair

The church was white. The rust flaking off the gutters freckled anyone walking beneath. The woman hobbled along, a paintbrush stabbed through the bun at the nape of her neck. It was scorching. Peppers were being dried in the heat. They poked out of every shutter like a street full of tongues.

It had been fifty years, but her feet remembered the steps without looking. The place hadn’t changed, only the priest. This one wore robes slightly too short. He looked like he enjoyed the sin of a breeze on his ankles. ‘Would you be able to help?’ he asked, local artists were scarce. Someone recalled a painting of a sloth she did as a girl. It was so lifelike it made people yawn. ‘We couldn’t afford to pay you, but…’

The woman stared at the picture of Jesus. The eyes were so faded it made her imagine someone trying to recall a sky from their youth and not quite being able to. Of course, she could help. It would be a pleasure.

She walked up the steps every day with a paintbrush in her chignon. Though she kept a bag of materials behind the pulpit, she liked that brush there. People spotted it and whispered. ‘Who’s that? Oh, that must be the artist on her way to work.’

The stone floor soaked into her bones, but the woman worked without complaint. She’d always known she was special. Though she was almost eighty now, the feeling never left her, ever since being a child it flickered inside her like she’d swallowed fireflies.

Once, her parents confiscated her favourite toy to punish her for sketching when she was supposed to be cleaning, but she didn’t cry. Though she missed her stuffed chimp, she stared at the desk drawer it was locked in and thought: it is fine, I’m meant for great things.

She thought so when her mother got sick and she had to leave art school, and when she married a grocer. It’s OK, she said, I just haven’t found where to be wonderful yet. Whatever she was meant for never presented itself. Or, if it had, she’d been too busy weighing apples and lemons to notice.

Painting in the subdued light of the church, the woman smiled. Reviving Jesus, making his beard full again and dabbing the colour back into his cheeks, it seemed her whole life had been leading to this. It was what she was destined for.

The coaches arrived full of people coming to catch a glimpse of Jesus. The fresco hadn’t turned out like the priest thought. It didn’t look like a restoration at all, but a whole other creature. The shadows were wrong. Its head was round as a bowl. It appeared to be covered in fur. With one click of a phone, some kid posted the picture online and it bounced around the world.

‘What’s it supposed to be? It looks like a fuzzy bear. Or a monkey or something, like a little furry monkey Jesus.’

The visitors stared at the picture, trying to understand why it fascinated them. Because it’s funny, someone said. It made Jesus more approachable, someone else said. Standing beside it was like receiving a sermon dedicated to anyone who had ever tried something, whether they could do it or not. It was a prayer to not winning, and being imperfect, being an artist, and being able to draw anything, so long as it was a monkey.

The crowds laughed and bought tea towels and keyrings. The priest beamed, staring out at the pews full of people drinking Cola and holding their phones in the air.

The woman stood in the doorway, peering in at all the world discussing her art. The fireflies were falling asleep inside her, she felt a dullness, the light in her not flickering anymore. Turning, the paintbrush fell from her hair. 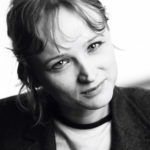 Angela Readman‘s stories have won The National Flash Fiction Prize, The Costa Short Story Award, and The Mslexia Story Competition. Her debut story collection, Don’t Try this at Home was shortlisted for The Edge Hill Prize and won The Rubbery Book Award. She also writes poems. Her latest book, The Book of Tides was published by Nine Arches (2016.)