Boy in an Ambulance

James sits on the landing outside his apartment, tying his shoes. His phone, cycling through YouTube clips, provides as much light as the lone working sconce above the stairs. The contractor is waiting in the shop downstairs, but no rush. He plays his game: tying his shoes without disturbing the phone balanced on his knee. If the phone falls, he loses.

He laces the right shoe, keeping his knee steady. The next video shows the dummy swimmer who faked a robbery in Rio. Then a few seconds about the U.S. flying four hundred billion to Iran. Trump, Trump, Trump. Zika, it’s awful but skip. Uber and self-driving cars.

Hammering and power-drills downstairs. He hates talking to the contractor. James and Candace, his wife, are converting the ground floor convenience store into a yuppie café. The timing is right, Candace says. She knows much more about business; plus, her ortho-surgeon father recently gave her a “cash infusion.” James’s line: Whatever you say, hon. He doesn’t pretend to be the brains; he just does as told. Today’s task: square the building’s pipe capacity with the contractor. And he is stalling with his shoe-tie game.

He bunny-loops the left shoelace, watching a reporter nervous-swallow in the back seat of a self-propelled Uber. He could watch videos all day. Serve it up and he’ll be your audience. Sounds better than talking pipe capacity with the contractor. “Your building’s pipe capacity is all wrong,” the contractor recently said. His name is Manny or Manfred, one or the other. James must be remembering the phrase wrong; “pipe capacity” sounds filthy. The older he gets, the more everything seems like a dirty joke.

Shoes tied, he snatches the phone from his knee as another video begins: a star dips in a void and then shapes into a flashlight emerging from rubble. James touches the phone’s power button but doesn’t press it. He waits to see what they’re showing him.

A man in shadow passes a sack to a man wearing a green vest. Not a sack—a child. The reflective strip on the vest glows as the man nears the camera. The boy’s hands are draped on the man’s shoulders and his head sways backward as he swings into a bright ambulance, passing a young man who’s wearing a baseball hat and a face like this can’t be happening. Someone mumbles to the boy as he passes. The man in the vest, in the back of the ambulance now, handles the boy with assembly-line precision. A few steps to a chair along the rear wall. Bends with his knees, pushes down the seat, sets the boy in it. Lunges across the ambulance to a shelf to grab—whoops, dropped his walkie-talkie. Forgets what he needed from the shelf and leaves the ambulance and camera behind.

The camera zooms in. A boy with troll-doll hair, powdered gray all over. Bruises on one leg shaped like a bowl, bare feet hanging off the seat. Looks like a sick kid waiting to see the doctor. Or a misbehaving boy told to sit and think about what he’s done. Blood covers half his face. The blood blends with his eye to form a wing, like face paint worn to the Cardinals game. When the camera jumps, the boy tilts his head like what’s that smell and the camera catches a bruise ringing one eye and blood circling the other. The boy touches the wing and then his hair, lowers the hand to study what is there and nearly wipes it on the seat, reconsiders and then goes ahead, a few pats clean. He turns his head and there’s a red crater on his forehead.

The footage cuts to the rubble again. Another man, he looks like a high-school art teacher, brings a second kid to the ambulance.

James has seen enough. The phone falls from his knee and he buries his head against his forearms. He can’t simply cry. He must picture someone watching him cry, a camera capturing the moment, the masses crediting him. He can’t help the warzone boy, this breaks his heart, and he wants credit for so sensitively crying on the stairs.

James watches these videos and then carries on, self gnawed down in unpeggable ways. He opens Facebook and posts a link to the video of the boy with the tag “this debits everything.” Then he clomps downstairs and cuts down the hall to the shop. The neighborhood is improving, his wife says; she’d normally oppose opening another coffee shop, but around here, at this time, they actually may be onto something.

James lingers behind the door, construction racket beyond it, and wipes his eyes with his knuckles. The workers will see his red eyes and assume he’s high. Maybe they’ll finally respect him. Or is that offensive, assuming construction dudes respect people for smoking weed? He takes his phone from his pocket and checks for a reaction to his post. Hester has replied, “Saw this, awful vid, but to your comment: debits everything—what?” He’s right. James didn’t contextualize his post. Candace often mocks him for this. “Context, James,” she’ll say. “You post random lyrics without telling what the song is. We need the context, the motivation, at least the name of the band.” She’s right, Hester’s right, but this time, with the boy in the video, he wishes they’d cut him some slack. Add a Sad emoji and move on.

He enters the future cafe and surveys the workers’ progress. A bar divides the room. The exposed brick looks sharp. The floors are refinished in that worn way everybody loves for some reason. Sheets of drywall piled by an interior wall, its wooden skeleton exposed. A kid wearing a backpack passes the wall-length window, and James thinks the kid is wired to blow, bomb in backpack, and then he forgets it.

Manny or Manfred, the contractor, a gray-bearded guy, smirks at his helper, a kid who’s fresh out of high school. Pipe capacity. James smirks with them, letting their dirty minds off the hook. A dirty mind is a byproduct of adulthood. He wonders what these jokes are for, why he needs these double entendres and filthy puns, what’s their use?

“Pipe capacity,” he says, and now he laughs. 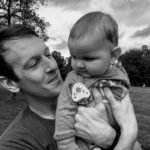