Mr. Downstairs had locked himself out again.

“Of all the gin joints in all the towns in all the world,” he said. His eyes did a funny little blink-dance.

Mr. Downstairs hated keys. They returned the favor, running away from him at every opportunity. This was our friendship: I found his lost keys and glasses. He’d walked me into the clinic, keeping his body between me and the spitting, fetus-picture-jabbing lady who told me God would punish me, that someday I’d want a baby and it would be Too Damn Late.

You couldn’t exactly say we were even.

I said there was cold beer in the refrigerator.

“Miss Upstairs,” he said. “You are my sunshine.”

We went into my kitchen. The cat stood on the counter and yelled at me because I’d been a terrible cat parent and left her alone all night and I told her that from now on I’d be spending all of my time with her. I broke free. I’d kicked myself loose of a boyfriend and a job and felt, for a moment, like I could burn down the whole world.

Classic. Right up there with walked into the door again. This was my life. A trailer park dumpster fire. And if the pee test was right, I’d be in deeper shit soon. Who has birth control fail three times? Who makes the same mistake, over and over?

I couldn’t make myself care. The view from my balcony was so pretty. The beer was so cold. I only wanted to talk about zombies and Robert Mitchum movies and why it was so hard to find a restaurant that made decent blueberry pancakes. That made us hungry. We wanted Indian, but the Indian place didn’t deliver and we were too lazy to leave the house, and the greasy paper-plate pizza place did deliver, but the thought made my stomach flip. The sun slid lower and I surveyed the kitchen. I found some not-too-stale tortilla chips and dumped them in a plastic bowl and came back with a jar of salsa.

My phone blipped. A message popped up: HAVE YOU SEEN THIS??? I saw the link: KITCHEN TAKEDOWN. Who had videoed it? Comments were already scrolling: Crazy bitch! This waitress is my spirit animal. 😂

I couldn’t go back. Or get a job anywhere else, unless I moved far away. I pictured myself pouring a hot cup of joe in some mom & pop diner in a town where nobody cared about YouTube. But wasn’t that the town I’d run away from?

When you come from a small town where nobody has ever “done anything” with their life except live it, you learn to scale down your expectations. When you come from a place like that, and you move to a city like this. A city where there is no mud season. Where nobody wears milking boots. Time passes, in a city like this, but it’s not real time. It’s vacation. You’ll always have another chance to make it right. You can’t possibly get any older in a place like this.

I wondered how long my neighbor had lived here.

My phone rang. I let it go to voicemail. It rang again. He turned the sound off and I wanted to cry; it felt like the kindest thing anyone had done for me in days.

“Is that the one who says kinema?” he asked.

I didn’t actually remember how long ago that guy had been. It was embarrassing to be such a loser. I said so. He said I wasn’t.

When I was ten years old, I told him, I won a red ribbon at the grange fair in my hometown. Junior Dairy Goat class.

“I knew you’d come through,” he said.

“No, because a red ribbon is second place. Blue ribbon’s first.”

I thought of those goats. I hadn’t forgotten anything about them, unlike the boyfriend who said kinema. Their names were Belinda and Melissa. They had floppy hound-dog ears and rectangular pupils. I couldn’t think of a single thing wrong with those goats, except that they were mine.

“Does life get easier when you just decide you don’t give a fuck?” I asked.

“God, so much easier.” He finished the bottle, stared down its neck. “But you’re too young to think that way.”

Only I wasn’t. Every day, every moment, I could feel youth flaking off me like layers of dead skin. Exfoliation, the makeup-counter ladies called it, and said I should add it to my beauty routine. I had no beauty routine. Didn’t exfoliate. Didn’t floss. Sometimes I washed my face. I was young enough to get away with everything, but every bill comes due sometime. Mortality was pressing up against me. Curling close like a cat on a cold night. 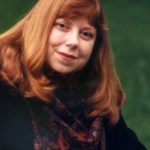 Kathryn Kulpa was a winner of the Vella Chapbook Contest for her flash fiction chapbook Girls on Film (Paper Nautilus). Her work was selected for the 2020 Best Microfiction anthology and has been nominated for Best Short Fiction. Her stories are published in Lost Balloon, Smokelong Quarterly, Superstition Review, Women’s Studies Quarterly, and other journals, and she is flash fiction editor for Cleaver magazine. Find her at kathrynkulpa.com.