In this fantasy I am always watching Saturday morning cartoons—

Two things that I remember:

Technically this wasn’t a cartoon but it was really great and it was on at the same time as the cartoons so it kinda counts.

There was this girl, Margo, and she lived in the dark on Venus with all these other kids, and she said—

The sun is coming!

The kids didn’t like this. They didn’t believe her. They didn’t like that she had memories of Earth. That’s where they were from—Earth. She said the sun is going to come and then it came and then they locked her in a closet. They frolicked in the sun and all Margo had was this teeny slice of light, but it was beautiful and real and she could feel it.

Ok, I thought, why should I ever write ANYTHING when this amazing thing has already been done? I didn’t want to write my own thing. I just wanted to write this, over and over and over. So I did. I went to school. I said, you know what—it’s coming. And Liz and Michelle looked at me. They said what? What’s coming?

And I said—the dark. It would come and we wouldn’t be prepared. In the Margo show they had to put on sunblock because they weren’t used to all that heat. I couldn’t think of what the opposite was for sunblock so I decided we needed to capture it—we had to capture light. We would need a net. We didn’t have one. So we did what we had to do—we used my mother’s Ziploc bags for peanut butter and jelly sandwiches. We waited after school and instead of playing hopscotch or stealing sour patch kids or smoking candy cigarettes we stole something even better—the sun.

What, I don’t see anything, said Michelle—who was a jerk.

Anyway, I had the sun, and I told her what everybody knows—if you don’t see it you’re not going to grow boobs.

That night I slept with it. I felt its warmth. I started believing my own lie and felt my boobs growing (just a little).

I believed so much that when the Day of Night came (Sept 27) I waited for the sky to go out. I waited, and when it didn’t come I wanted to rip out my heart.

This was my salvation and my curse. It was an animation series starring these people: Eric (the jerk aka Male Michelle), Hank (the hottie), Sheila (the prom queen/soccer mom in training), Diana (the bad ass), and Bobby, the archer. Also Uni who is exactly how she sounds.

Basically all these kids get caught up in this super scary roller coaster and go to this world, the realm. Here they meet the dungeon master. He said, greetings, my friends, there will be no school for you tomorrow.

Actually, he didn’t say that. That was my stab at invention. He said something about magic powers, which was also cool.

The whole point was they had to get home. And at the end of every episode this sad music would play, like something dying right inside you.

One night I dreamed that Hank came to my window. He was grown. He still had that blond hair and it was kind of fluffy but also tame, like he had grown up and knew he had to chill—at least on the hair front. I wanted to ask him about going home—if he made it—but the mood wasn’t right—it didn’t seem like the right time, and he had this horse and it was white and beautiful and then I realized it was Uni, grown up, and she looked at me and I climbed on back and I was soaring, I was away, I was leaving home, the fire escape and the Bronx and my parents and even the abandoned swimming pool across the street, I looked at it and waved.

And I felt that minor key, inside me. Even in the morning, when I woke up. Everything was alien—my mother, my father, my miniature schnauzer, and I knew it would always be this way, that I’d be forever seeking home.

*Years later when Google came around I’d discover that all this genius was based on a short story by Ray Bradbury, “All Summer in a Day.” I’d also discover that Margo is actually “Margot”—but by then it would be too late—for me, she would always remain Margo. 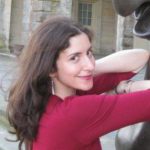 Leonora Desar‘s writing has appeared in Black Warrior Review, River Styx, Passages North, Mid-American Review, SmokeLong Quarterly, Wigleaf and Wigleaf‘s Top 50, and elsewhere. Her work has been selected for The Best Small Fictions 2019, and Best Microfiction 2019 and 2020. She won third place in River Styx‘s 2018 microfiction contest, and was a runner-up/finalist in Quarter After Eight‘s Robert J. DeMott Short Prose Contest, judged by Stuart Dybek, and Crazyhorse’s Crazyshorts! contest. She lives in Brooklyn.