Lincoln called the meeting. We gathered inside the barn where the horses used to be, but the horses had died and now we had chickens.  We sold eggs at two dollars a carton for city people trying to keep it real. On the side, we sold weed.

“I found this on the ground,” said Lincoln. He held up a cigarette butt, a visual aid. He looked sickened and disappointed. Tobacco was against the rules on our farm. So were processed foods, white sugar, caffeine, drugs (except for the weed we grew and sold to mostly high school kids), alcohol (except for the beer we brewed and the grapes we fermented), fast food, racist or sexist remarks, ageism, meat (except for the chickens we sacrificed for birthdays and holidays), and TV (we had movie night, every Friday, but only a handful of movies, most of them starring Humphrey Bogart).

“My sister smokes,” said Erin. “And you know that.” Erin was eight months pregnant. The father was either Lincoln or me. She said it didn’t matter. The baby belonged to all of us, on the farm, she said.

“Your sister needs to respect our rules,” said Lincoln. He claimed 93% Native American blood and wore turquoise jewelry, but nobody believed him. Sometimes I went crazy, thinking about Erin with Lincoln, coupling, canoodling.

“Who made these rules?” I asked. “We’re always talking about rules. Why?”

I played bass in a country fiddle band: Tut Taylor and the Red Hots. I made actual money, and was possibly the soon-to-be father to Erin’s baby. “There’s too many rules,” I said. “You aren’t God, you’re just Lincoln.”

“I hear you, brother Joby,” said Lincoln, but then he went on to the next topic.

We didn’t call our commune a commune. We called it our farm: Eggs, Peace, Harmony. Our neighbors in Taft, Virginia didn’t trust us—fifteen hippies, all that hair and flannel—but we won them over with omelets and good manners.

Erin gathered eggs and I painted the barn door a milky brown color. Summer swept up chicken droppings. She wasn’t wearing a shirt. She never wore a shirt.

“This is bullshit,” I said. “I might leave. Get my own place. Eat french fries.”

Erin smiled at me, the way a mother smiles at her mouthy child. Something radiated inside her. She wowed us. Every man, woman, child and chicken. There was something Jesus-like about her.

“We have it good, Joby,” she said. “The rules are a little much, and Lincoln, I know, but we have these woods, this quiet. We’re family.”

We had Erin. We protected us. We were joined.

“But aren’t you sick of Humphrey Bogart?” I asked.

“I wouldn’t mind more movie diversity,” said Erin. She cradled her enormous belly. “But I’m happy. Every day, something amazing.”

“And what about the kid?” I continued.

“What about the baby?” I said. “Will you go to a real hospital at least?”

“Not your chores,” said Summer.

“You can’t talk,” I said. “You are seriously the slowest sweeper I’ve ever seen, Summer.”

Here, I should add, I was pretty stoned. I was trying to paint a series of dots on the door to make it look like one giant dot, but it looked more like mildew infestation. On her way back to the main house, Erin stopped long enough to kiss me on the cheek, to hug the half-nudist Summer. She moved slowly up the low-sloped hill. Beyond the house, the mountains. I could smell jasmine. I could still feel the place on my face that Erin had kissed so lightly. I stood beside Summer and we watched Erin move up the hill.

For work, I wore a cowboy shirt with snap buttons. Enormous belt buckle. Boots to make me taller. Tut Taylor made us dress this way. Over my hair, I wore a straw cowboy hat.

Erin wore a red dress from Mexico and her hair was pulled back into one long, ropy braid. At the bar, she drank seltzer water and sat away from the smokers, close to the open door.

She stayed for both our sets. It was nothing special. The usual songs: George Jones, Willie Nelson, Cowboy Swing. No fights broke out, no hecklers brayed, just a dozen people out there in the dark, halfway listening. In a band, people don’t really notice the bass player. We’re necessary, but invisible. Still, every time I glanced at Erin, she was looking back, smiling deep, nodding her head in time with our music. Tut Taylor and his magnificent mane of yellow hair.

We arrived back home shortly after midnight. Everyone was awake and freaking out. Ellis had burned a pie and the farmhouse had filled with smoke, but that wasn’t the reason for panic.

“Lincoln got busted,” Summer told us, all breathless. “In town, selling weed, a lot of weed.” She splayed her hands over her heart space and took a deep, calming breath. “We’re in trouble,” she said. “All of us.”

Under moonlight, we plucked our weed from the garden. We worked in near silence. In the near distance, goats bleated, chickens clucked. We yanked every plant, and then mulched the empty garden. Far, far away: a train whistle, a coyote’s song. We filled lawn bags with our highest-quality weed and stored it by the creek. We built a bonfire in the open field behind the silo and tossed ditch weed into the fire. We pulled back the smoke and stored it in our lungs. Summer and the new girl, Gwen, held hands. Gwen was crying but I didn’t know why. I was still wearing my stupid hat, my cowboy shirt, my ridiculous boots. Erin stood beside me. I told her we’d be OK. I told her I’d stay with her if she’d stay with me. I lied and said I was sorry about Lincoln. She closed her eyes and the wind tugged at her hair. We heard police sirens, getting closer. All the chickens cocked their heads in the same direction. 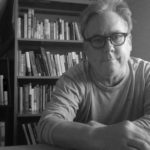