Shawn and I agreed that I would be the one to rob his mother on Thanksgiving, since she always watched him like a hawk. Suspicion had tainted his mother’s love ever since Shawn got arrested back in high school for selling her prescriptions at pep rallies. That was a long time ago, though. We’d decided to get married. We talked about having kids.

We got to her house early and stood around drinking cider and spiced brown rum with all the relatives. Shawn wore a tie. Seeing him in a tie made me want to have a baby with him. Every now and then we looked outside to see if there were any birds on the lake. There were some seagulls, over two-hundred miles from the coast where they belonged. I said, “What are they doing here?” and some oily cousin said something something “migratory.”

When it was time to take out the turkey, I offered to help, but Shawn’s mother refused. I thought, Fuck you, bitch, I’m trying to play nice. With fogged glasses and trembling arms, she lifted the golden bird all by herself. I hoped she would drop it, but she didn’t. Everyone began to settle down for the meal and I knew it was my chance. I said that I was visiting the little girls’ room, but instead I went into Shawn’s mother’s bedroom and found her Black Forest jewelry box sitting on the dresser, foxes and pinecones carved into the dark wood. I pushed what sparkled into my bellybutton. Shawn had gotten me to practice with M&Ms, using them to stretch the cavity. We ate them afterwards and the deepest candy was half-melted from body heat. Shawn would clean me out with his tongue, that place where my lifeline used to grow.

I pushed in his mother’s gold rings, diamond studs, sterling charms. I pushed in a strand of pearls, pearl by pearl, and when I ran a hand over my stomach I could feel my precious load, rippling hard beneath the skin. I was at capacity. I pulled down my shirt and got back to dinner. I looked at Shawn and wanted to find some moonlight and kiss him in it, like that song. I wanted to make love in the sand, even if it was just on the shore of the little lake, I didn’t care, and I wanted all the treasure to come rushing out of me like turtle eggs.

Me and Shawn sat in rocking chairs on the deck and glowed like turkeys in the sun—golden, basted, steaming. I was stuffed and happy. No one knew what I had done. I was free to imagine a future where we got everything we deserved and as far as I was concerned, we deserved heaven on earth. I said, “Roll me to the lake, Shawn,” and we walked down there to feel our toes in the sand. We hugged and swayed side-to-side. He asked if we needed a story in case his mom discovered that the jewelry was gone. She’d confronted us once before, saying I was bad for him and his teeth were turning brown, so it made sense she might get in our faces eventually. We decided that if she asked about the missing jewelry, we would just blame his blind, brain-damaged aunt. We’d say that we saw her finish a glass of cider and stumble toward the bedroom, that she probably read the pearls with her hands and liked the story they told. 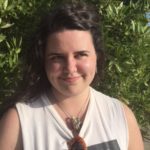 Wynne Hungerford‘s work has appeared in Epoch, Blackbird, Iron Horse Literary Review, American Literary Review, The Boiler, The Normal School, and SmokeLong Quarterly, among other places. She received her MFA from the University of Florida.