Red nails. Red lips on a wide thin mouth. Red bra cutting between ribs I can count from my seat across the aisle. Three before they disappear under the sides of her dress, two before his hand reaches inside to cup her breast.

Her eyes stare into mine as her small body shakes with the train, his breath on her neck. She slides her unlit cigarette under her nose as her tongue traces her bottom lip, then pulls the chapped flesh between her teeth. I look away first.

There is a mother holding the hand of a little boy to my left and I pretend to ignore the dirty intentions thickening the air; the dirty things the man says against her skin. An announcement for the next stop comes over the intercom and the woman laughs, the tendons in her neck strained as she throws her head back. Her beauty is a weapon she’s wielded her entire life. Which is as long as I’ve known her.

She crawls out from under the man’s needy body and crosses the aisle, sits on the other side of me and holds the dirty metal bar with both hands. One on top of the other.

“What’s wrong Kitten? Maybe you wish it was your body he’s pawning over, huh?”

Her voice dips low, every breath placed and every vowel calculated. I know better than to answer. A minute passes and her gaze breaks mine to lock behind me, a slow smile cutting into her beautiful face.

A small voice behind me answers “William.” Her smile grows and her red lips retreat against dark gums and small teeth.

“Tell me, William,” She pushes her shoulders back and glances down her own body. “What do you think of my new dress? Do you think I look pretty?”

The mother makes a low sound in her throat as she drags William out of the seat next to mine and closer to the door. The woman laughs and leans into my side.

“You want to eat, right?” Her voice hums in my ear.

“We don’t have to go with him.” But my voice is small, a whisper like a breeze that gently stirs the leaves in the spring, and the purity of it is no match for her.

She raises one eyebrow in surprise and stands as the train slows. Passengers begin to move and a restless music of bodies fills the open space between us. Ignoring me, she straightens the wrinkles on the thin fabric of her dress as his hands reach out and grip her hips from behind. She lets her head fall back onto his right shoulder and giggles while he bites her collar bone. My stomach turns and I look away.

It’s been three hours. I’m sitting on a brown mattress in the corner of a room littered with cans and bodies. Beer cans, soup cans, pop cans turned into pipes and forgotten instantly. Bodies unmoving.

There is a thin faded sheet pulled tight on the bottom of the mattress and here I sit, tracing the memory of flower patterns long forgotten; tiny fibers of muted colors tattooed on the skins of lovers who never use their real names. I listen from behind the door with the missing knob, her voice echoing through the small secret tunnel between her world and mine, and I wonder how the man stands it.

It’s been two days. We walk the Venice boardwalk in clothes borrowed from the trash outside Goodwill. I buy a hotdog from a vendor she calls Joe and she buys two, and we cut through the grassy bank barefoot, mustard gathering in the corner of our lips. She hums a song I’ve never heard and tosses her second hotdog into a trash can before our toes sink inches into white sifting sand. We keep walking, transients calling back and forth to one another over our heads and pretty families of four rush to spots on the endless horizon of water with their pales and their shovels and little floaties wrapped tight around their biceps.

White panties. White bra stained with yellow sweat. White skin against a tempered summer heat. She bends to reach into the white sand and the curve of her spine protests against the confines of her body, tiny blue veins spread beneath the surface like the veins of a leaf held up to the sun. She straightens and holds a beautiful seashell in her palm, the dirt under her nails not enough to distract from her unsolicited elegance.

“Like you. It reminds me of you Kitten. How simple and small and pretty and pointless.”

I turn my eyes back to the sea. I hear the children squeal and focus on how their pitched songs blend with the cries of the gulls. A loop. One line connects to the other until we all blend together and you can’t tell who is the living and who is the dead, what is breathing and what is growing, what is meant to be used and who is using.

She snaps the shell that is sitting so pretty in her palm. Then snaps it again. She wants me to cry. It’s suddenly the most important thing I have ever done to remain impassive, to breath her aura and not cave in the center from the weight of it. We stand like this, me staring at the edge of the earth and her staring at me.

And then she tips her palm to the side to let the little bits of shell fall, some sticking to the sweat in her palm. They fall to join their sisters in the white earth at our feet and I feel like it means more, that something else is falling and that something is significant but what is it?

And then she moves. She walks into the water until her hair is floating on the surface, tugging back and forth in the tide. 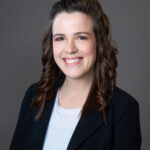 Jessica Fogal lives in the beautiful Pacific Northwest (USA), where she’s a full time legal assistant, amateur street photographer, and author. She’s had many prints showcased in art galleries such as Terrain Spokane, and continues to use her lifelong passions for performance, visual, and literary arts as an inspiration for her creative writings.